At the end of the 19th century, the civil engineer Alessandro Lorenzetti embarks at the Port of Genoa, Italy, bound for Brazil, where he came to work in projects at the Port of Vitória, in Espírito Santo, and at the Santos - Jundiaí Railway, in São Paulo . He remained in Brazil for several years, returning to Italy at the beginning of the 20th century.

During his time in Brazil, Alessandro Lorenzetti met Carlo Tonanni, with whom he established a partnership, in 1923, of the Tonanni & Lorenzetti foundation. The building was located at Presidente Wilson Avenue, Mooca neighborhood. This area had the most industries of the city and the small factory started only with four employees and four automatic lathes, with their goal by manufacturing precision screws for many utilities.

A few months later the company's activities started, his sons Lorenzo and Eugênio arrived in Brazil, together  continued the work started by his father Alessandro, creating the foundations of what is today one of the largest manufacturers of metal sanitary ware and household appliances, Lorenzetti S.A. Indústrias Brasileiras Eletrometalurgicas. 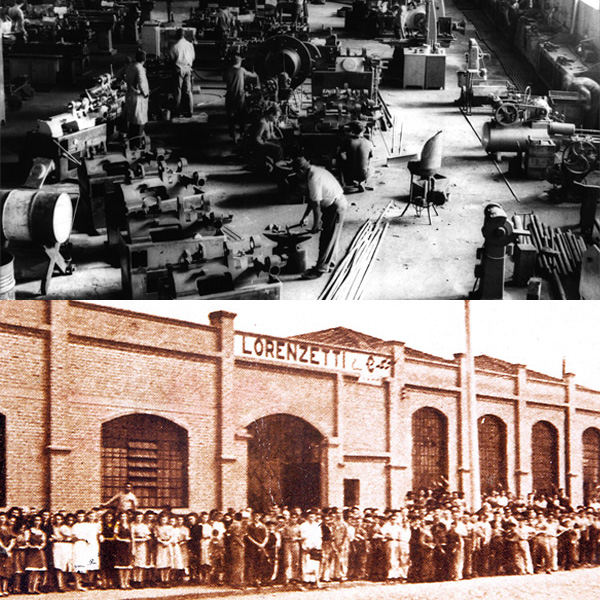 The Lorenzetti brothers quickly increased the number of customers and the product lines, manufacturing screws, pins and axles and, at the end of the decade, parts for industrial machines. As a result of the good work they performed, in a few years, Eugênio and Lorenzo acquired the share of partner Carlo Tonanni.

In the 1930s, they expanded their operations in the metallurgical sector, throughout the manufacture of metal accessories for curtains, restaurant trays, sugar bowls, cruets, brass vases, among other products. Under license from an Italian company, the company also started importing and selling electrical equipment for installations.

In the following years, Eugênio and Lorenzo continued to expand their businesses, with the new corporate name Lorenzetti and Cia, remaining attentive to the needs of the time and seeking quick and innovative solutions, making the company a pioneer in the production and commercialization of various products. It was in this context that skates and lighters were produced, among other products.

During the 1930s, the company develops and manufactures porcelain disc insulators and hardware for power transmission lines and innovates by manufacturing for the first time in South America the resin known as "bakelite", used for the manufacture of electrical material for domestic and industrial installations. It was also the first in Brazil to manufacture electric motors up to 100HP.

The World War II brought huge challenges for the company, which, despite the difficulties, knew how to take advantage of the opportunities and emerged strengthened from this difficult period. Due to the scarcity of gasoline, Lorenzetti manufactured devices that used coal as an energy source to run engines. This equipment, known as gasogen, was installed in automotive vehicles.

It also manufactured parts for automobiles, in particular spark plugs of the “LOZ” brand. Started the production of high-pressure hydraulic pumps and drawn steel. At the end of the decade, the company expands commercially throughout South America. 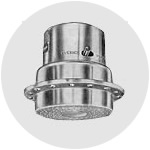 In that decade, a major milestone of Lorenzetti history, which started production of the automatic electric shower - household appliance, which was the company's main product in the 50s. With the successful launch, the line was expanded with the production of electric taps and heaters. 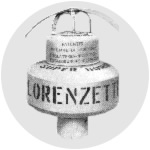 Looking towards the future,  the company started on the 60's expanding the business through industrial and commercial market by manufacturing new appliances and high voltage materials, such as floating pumps for wells, fans and electric irons.

It also started the production of capacitors for starting motors, for radio and TV and for power factor correction. 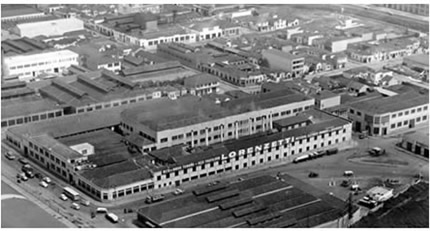 In the mid-1970s, Lorenzetti launched its first electric shower head made of engineering thermoplastic, starting a new generation of household appliances, which combine quality and affordable price, and complement the line with the production of flush valves.

The company deeply entered in the production of heavy-duty, high-tech electrical equipment, such as high-voltage insulators, disconnect switches and SF6 gas circuit breakers up to 800,000 volts.

It designed and produced fuse switches of up to 32,000 volts, used in electric power distribution lines, becoming the largest manufacturer of this equipment in Brazil. At the plant located in the state of Santa Catarina, it manufactured engine control centers and control panels.

All hydroelectric plants built in Brazil by then,  such as Itaipu, Tucuruí, Xingó, among others, own Lorenzetti’s equipment.

The engineering division of the group designed and built electrical substations for industrial and large consumers. 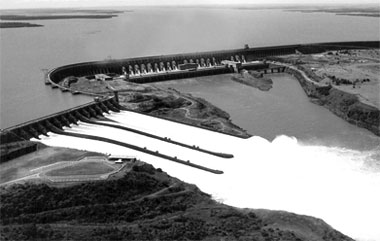 The 1990s marked the reorganization of the company's activities. Efforts was based on creation, production and sale of appliances for residential use. More and more the brand differentiates by the product quality and solutions offered. The company expands its activities in the country and in the world and launches the first electric showers with electronic control and built-in pressurizer. 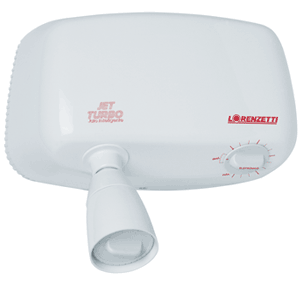 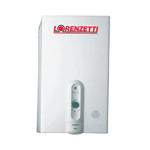 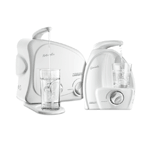 Lorenzetti has developed advanced technology for water treatment and launches Water Purifiers. The company has its own laboratory with the most modern equipment, to submit to rigorous tests, all lines of the brand. For Lorenzetti, quality water is health. 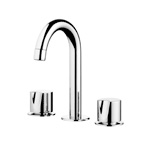 In 2003, the company starts to operate in the Sanitary Metal Wares market, with a complete line of products that combine quality and differentiated design to the different consumer audiences, aspects that inserted and maintain Lorenzetti among the largest manufacturers of sanitary metals in the country. It is the fastest growing segment in recent years.

To meet the demand of this segment, Lorenzetti invested in new plants, significantly increasing production capacity. Installed in Mooca, they occupy an area of 24,000 m², with modern equipment for the manufacture of components and assembly. 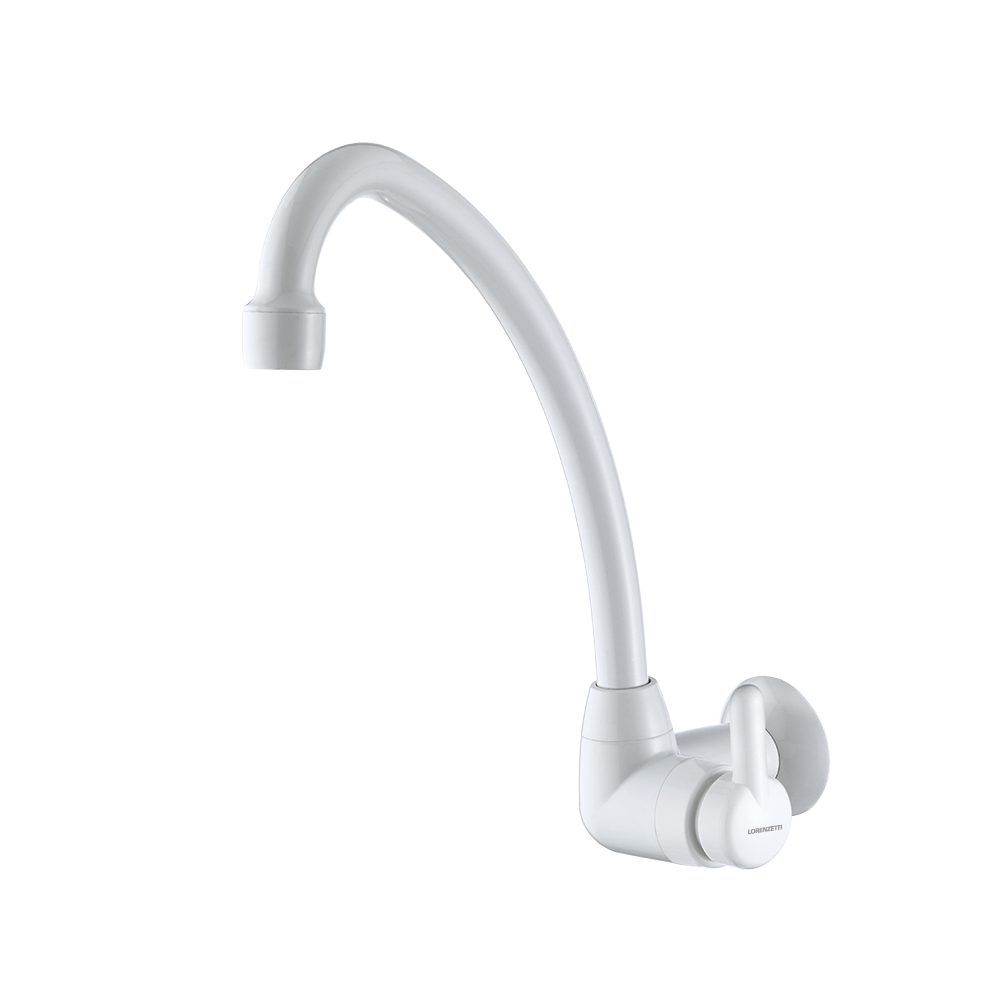 Since 2010, Lorenzetti has had a line of sanitary plastic wares, consisting of  kitchen, bathroom and laundry faucets, toilet seats, shower heads, valve handles, flushing valves, and gardening accessories that guarantee an affordable price, resistance and durability.

Manufactured with engineering plastic, the entire brand portfolio has the characteristics that differentiate Lorenzetti in the market, such as: quality, durability and design.

The result of the investment is a factory with automated gas-assisted injection processes, - English technology used in the manufacturing of LCD panels and LEDs -, which provides a perfect finish. The products design and functionality, in turn, are totally different from the ones existing on the market and were created based in surveys conducted with consumers.

The launch of this line of products represents Lorenzetti's concern in offering innovative products through manufacturing technology and raw materials. 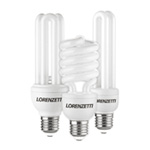 In 2012, Lorenzetti expands its portfolio of home solutions with the launch of the line of compact fluorescent lamps. The product replaces incandescent light bulbs, with significant savings in electricity consumption and longer life.

In 2014, the company made a line of LED lamps available to the market and, in 2015, it complements its portfolio with high-power fluorescent models for industrial and commercial use. 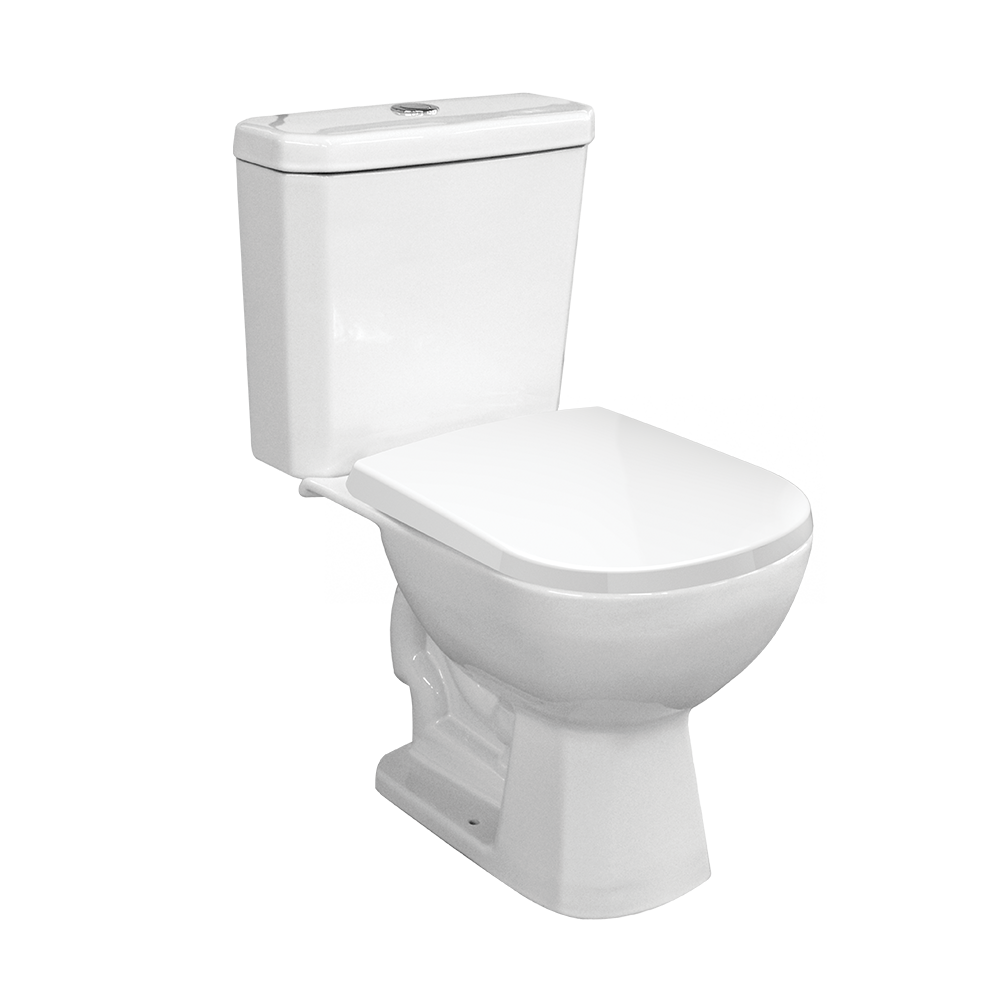 In 2015, Lorenzetti announced the acquisition of a sanitary ware factory named Sanitex Sanitarios Togni Ltda, located in the city of Poços de Caldas, state of  Minas Gerais. The factory, strategically located in the central region of the country,  near by the largest consumer markets. Equipped with the most modern equipment to produce porcelain sanitary ware, such as toilets, toilet cisterns, basins, pedestals, tanks and urinals, in compliance with ABNT’s  technical standards and with water consumption reduction regulations.

Lorenzetti is an innovative company, which uses modern management tools and acts in an integrated manner with society, seeking a balance between human activity and the environment, economic development and quality of life. The company also invests heavily in research and development, in the renovation of its industrial park, in the automation of manufacturing processes and in the training of its employees. 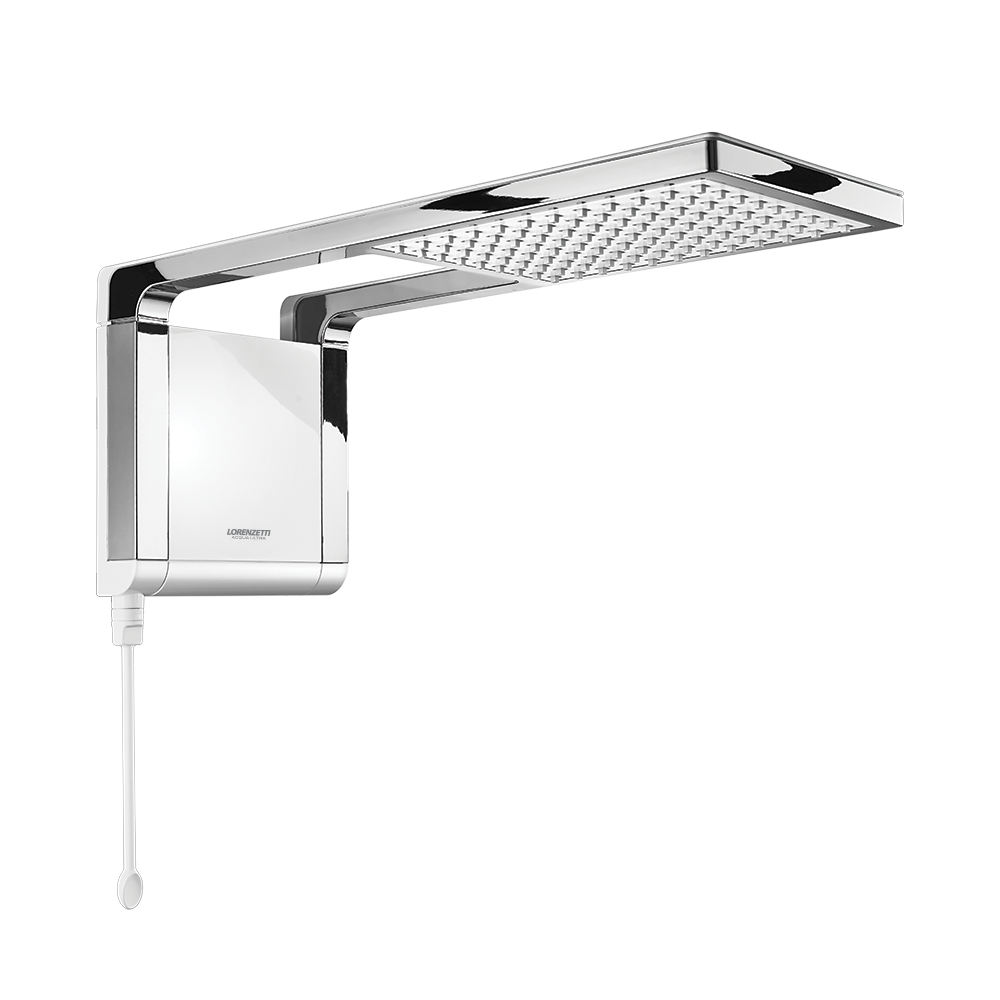 Today, Lorenzetti's challenge is to revolutionize its own innovations in the electric shower segment. In 2015, Lorenzetti surprised the market with the launch of the Acqua Ultra line. The bet was on innovative design of the electric showers, with a compact and slim design, similar to non-electrical showers. The slim shape resulted on the  model of  Loren Ultra Resistance, which is the first shower with a flat design on the market, which innovated the concept of durability and performance into existed electrical heating  element and provides freedom in the creation of new designs for electric showers.

Exclusived and patented by Lorenzetti, the Electric Heating element Loren Ultra provides a  superior durability compared with the ordinary ones. The initiative was awarded in the Construction category of the 29th Design Award of the Museum of Brazilian House (MCB) in the same year.

In 2016, Lorenzetti was recognized as the most innovative company of the country into construction materials and decoration sector by the Innovation Brazil Award due to the creation of the Acqua Ultra line. The award resulted of a survey conducted by Strategy & Consultancy and the newspaper “Economic Value”, which evaluated investments in innovation, best practices, the new products and strategies, which were adopted exclusively by national companies. 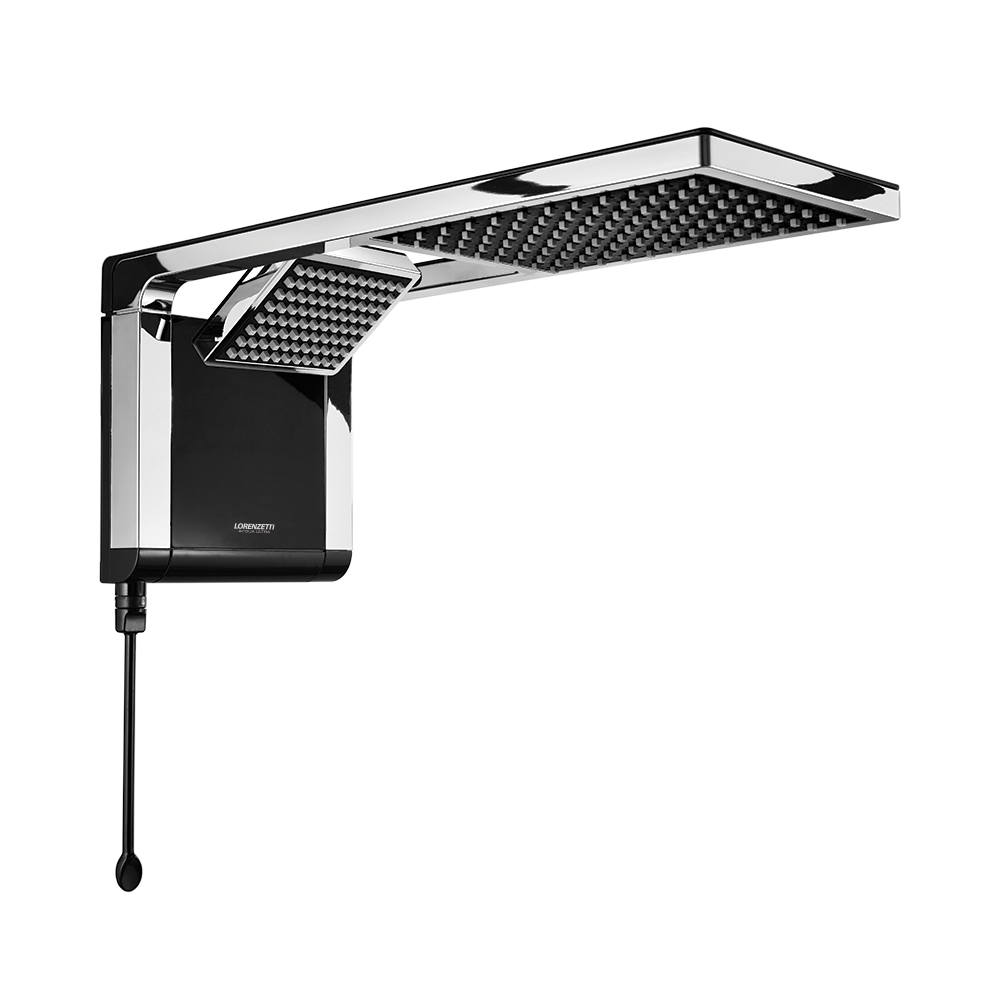 In 2017, the Acqua Ultra line was expanded with the Duo version, which includes two different shower heads in the same product. This was another innovation in the category.

Lorenzetti is the most powerful brand, according to the INPI (National Institute of Industrial Property), for the knowledge and value of the brand among the Brazilian population. Lorenzetti is acknowledged to 75% of the Brazilian population, according to the Data Folha Institute (April/2018). In addition , besides well known  by two thirds of Brazilians , or approximately 119 million people,  by the Datafolha Institute research point of view tells out the Lorenzetti's image is highly positive and stands by attributes linked to the outstanding brand,  such as trust, quality product , prestige , recommendation to others, tradition and modernity.

In 2019 the flex model, which is compatible with other heating systems, completed the Acqua Duo line.

Lorenzetti did not stop growing and, in order to support the planned expansion of production capacity for the up coming years, its acquired area of 27,000 m² at Mooca neighborhood, state of São Paulo, where started business  in 2019. With a strong presence in the market and with a large customer base, Lorenzetti stands out and it is recognized for distributing its products throughout all the national territory.

All the work and effort undertaken by the company and its employees over more than 95 years of history has earned awards and recognition from various organizations in the sector and society.

Check out the awards received by Lorenzetti 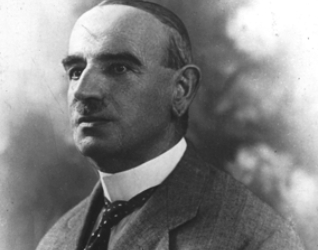 Born in Italy, graduated in Civil Engineering in 1886 in Rome. In 1923 he established Sociedade Tonanni & Lorenzetti. 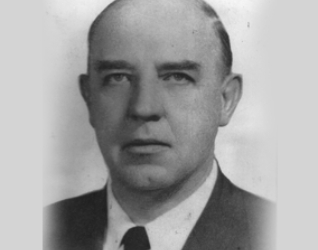 Itallian, industrial and chemical engineer. Responsible for its administrative and commercial division. 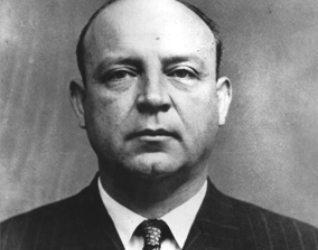 Itallian, land surveyor. With a creative calling, he held several patents, including that of the automatic electric shower.